Life As A Big City Reporter 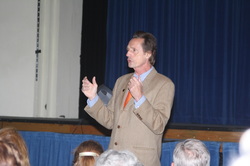 In the summer of 1978, Joe Starita had an interview in Miami, Florida, at the prestigious Miami Herald. By January of 1979, he made the move from the Daily Nebraskan, a smaller city Newspaper, and entered the world of big city Journalism.


After four years of 'proving his worth' to the paper, he got the position of the New York bureau chief for the paper. So, once again, he moved his family. This time, to New York. From big city, to bigger city. After another four years, he was given the coveted position of Investigative reporter, and back to Miami the family went.

He wrote an article on the affair between presidential candidate Gary Hart and Donna Rice, for which he received national notation. However, it was for his article on insurance fraud, committed against Haitians, that won him a coveted spot as a finalist for a Pulitzer Prize.
Powered by